Your Call Is Important to Us

Your call is important to us. Please wait until the next available representative can take your call. 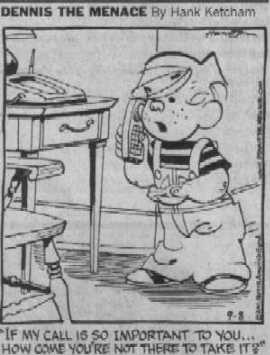 If my call were really important to them, they would hire enough representatives to avoid waits longer than 5 minutes. Instead, I have waited as long as 40 minutes, after which I hung up in frustration.

I have decided to strike back! First of all, when I get stuck in a phone queue for more than 15 minutes, I send a letter to the CEO of the company, telling him (rarely is the CEO a woman) that his call-center is understaffed relative to his customer base. If the call was about the possibility of me being a customer of that company, my letter indicates that I have decided to do business with some other company. Then, I add the name of the offending company to the list below, to make public how the company abuses its customers.

Voice mail in a large organization is just as bad. While the "representatives" are dealing with 10 other clients, I leave a message asking for a call-back. Apparently, 30 others left voice mail ahead of me. If I ever get the call-back, it might be three or four days later, again indicating that there are just not enough representatives. The CEOs of those companies also get letters from me, and the companies are added to this list.

Laura Penny wrote an interesting book titled Your Call Is Important to Us, subtitled The Truth About Bullshit (Crown Publishers, 2005, ISBN 1-4000-8103-3). She describes how call center hell (her term) is part of the new merchandising philosophy of "The customer is always wrong".

To me, companies that solicit you to send E-mail instead of calling and then never reply to your E-mail are another bane.