Yes, this is about an ancient beauty. No, this is not about a queen of Egypt or about a film starring Elizabeth Taylor. This is about a California desert tortoise (Gopherus agassizii).

Under §5000 of the California Fish and Game Code, it is illegal to "sell, purchase, harm, take, possess, or transport any tortoise". This especially prohibits removing desert tortoises from their native habitat.

However, once a tortoise is removed from its habitat by a poacher, it cannot be returned. Tortoises away from the desert often develop diseases that can devastate a wild population.

Thus, the Department of Fish and Game established its adopt-a-tortoise program to place poached animals in responsible homes. As part of that program, Code §5002 makes an exception to §5000, allowing the Department to issue permits for the possession of desert tortoises. In cooperation with the Department, permits are actually issued by the California Turtle and Tortoise Club.

For many years, the Los Angeles Times published a local supplement on Sundays — Home Magazine — which had significant substance with weekly advice columns for gardeners, pet owners, and cooks. When there was an article about a unique house, there would also be floor plans of that house.

One summer Sunday in 1977, I read an article in Home Magazine about an adopt-a-tortoise program sponsored by the California Department of Fish and Game. I called the phone number in the article, and soon Cleopatra entered our lives.

We estimated that Cleo was 10-15 years old when we adopted her. This was from counting the ridges on the scutes (individual sections) on her carapace (upper shell). Now (2020), that would make Cleo about 50-60 years old. Counting ridges only gives approximate age and only works for young tortoises. Older ridges get worn down; and on older tortoises, new ridges are less tied to annual growth. 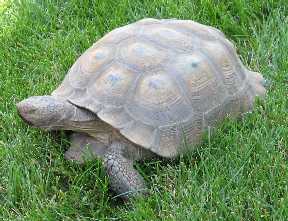 The first question was: What do we feed her? Cleopatra came with a wad of literature on the care of desert tortoises. The first thing I noticed was that we should not feed her lettuce, which contains no nutrients but will fill her up and discourage her from eating more nutritious foods. We put Cleo out in the back yard. Before we could finish reading about her care, she was happily munching on the lawn. The literature said that would be quite good for her. Now, for a treat, we sometimes give Cleo grapes or loquats, both of which grow in our garden. She loves rose petals; I've even seen her bang her shell against a rose bush to shake petals loose. Fortunately, Cleo likes to eat the weeds that pop up in my flower beds. Unfortunately, she also likes to eat some of the flowers, especially begonias and thrift (sea pinks).

For Cleopatra's first home, I bought a kit for assembling a wooden dog house. 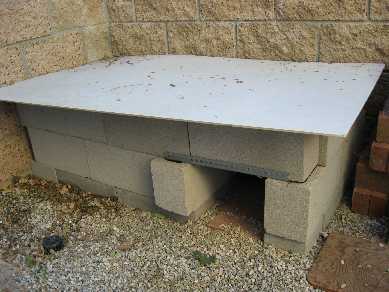 I had the doorway opening cut a bit wider and lower than would be usual for a dog house that size. The house lasted quite a few years. When it started to deteriorate, I discovered that such kits were no longer available. Since actual dog houses were just not appropriate, my neighbor across the street came to the rescue and built Cleo a new house.

When that too began to deteriorate after many years, I decided that Cleopatra needed a more permanent home. After much planning, I assembled a house of concrete blocks roofed with a cement board. While the blocks are not cemented or grouted, there is steel rebar in the channels. The house is on a bed of pea gravel for drainage, over which there is a floor of paver bricks. Placed where block walls make a corner, the house actually has only two walls; the roof corner at the block wall corner is supported by an adjustable post. During the summer, Cleo often sleeps under a shrub. From mid-October to mid-April, however, she hibernates in her house; then, I close off her doorway with a piece of plywood to exclude unwanted visitors. (NOTE: Since the photo was taken, Cleopatra grew some more. Thus, I had to rebuild the house with a wider doorway.)

Cleopatra needed to visit a veterinarian three times in the years she has lived with us.

Cleo recovered from all three events without any lingering harm. Today, we are very careful about what we leave on the ground, especially string, twine, and rope. Each spring, I check to make sure that Cleo not only starts eating but also leaves droppings (further evidence of her appetite).

Through the years, Cleo has continued to grow. There are narrow spaces in my garden she used to visit where she can no longer fit. Measured along the curve of its dome, her carapace is 15 inches long and 14 inches wide. The flatter plastron is 13 inches long and 10½ inches wide.

Yes, Cleopatra is registered with the California Department of Fish and Game through the California Turtle and Tortoise Club. She has a numbered registration sticker just under her carapace where her left hind leg exits her shell. Every few years, we need to get her a new sticker because her leg action wears away the old one.